Earzel Riddick was injured in a motor vehicle collision Oct. 28, 2012 collision. Riddick was a front seat passenger in a car that had slowed for an ambulance at an intersection in Crown Heights. The car was then rear-ended by Sutherland’s car. The trial Earzel Riddick v. Hugo Sutherland resulted in the jury awarding Riddick $260,000 for future and $100,000 for past pain and suffering.

Riddick’s vehicle lurched forward about a car’s length, in testimony, he was wearing a seatbelt and hit the dashboard in a heavy impact. Emergency responders were summoned to the scene of the collision, but Riddick refused medical attention. His reason: He was worried about an imminent storm and close proximity to his home.

However, according to Riddick, he felt pain the very next day, and went to the ER. As seen in many car accident cases he was given pain medication, sent home and had not had any X-rays. He cited delays in follow-up treatment for his injuries, and alleged that he eventually required three surgeries. The argument in defense was that the claimant suffered significant limitations directly related to the accident.

In the end the jury sided with Earzel Riddick and awarded him 360K for his pain and injury. 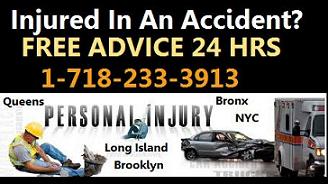 New York Car Accident Attorney, Paul Ajlouny weighs in, “Delay In Medical Treatment Can Hurt Your Personal Injury Case. We see it all the time. Accident victims do not always necessarily feel injured immediately following a car accident. They feel o.k. after the accident, but then the next day, they feel pain, so then they decide to go see a doctor.

Even if the car accident is the other guy’s fault, and his insurance is offering a settle, your still in jeopardy. In the long run your injuries will be a huge determination of what your awarded. A really good attorney can pursue compensation for damages.” Says Mr. Ajlouny.